We'll start with the good news about the adrenalectomy first. The mass on my adrenal gland was not cancer nor was it a pheochromocytoma of any sort. Instead, it was a benign mass that was taking  up space and generally creating havoc. Like an unruly neighbor, the mass had to go. 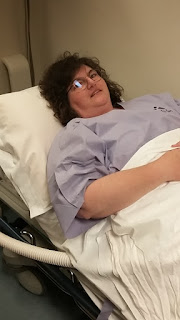 My medial team consisted of an expert surgeon, fabulous endocrinologist and equally terrific GP (general practitioner). I think they said it took around three hours from the time goodbye was said to my husband and daughter. All went well with the surgery and the overnight hospital stay. My temperature skyrocketed to 102 F at home and my blood pressure went along for the ride. The doctor gave me some pretty strict instructions when I called to let him know.

Since the outrageousness was potentially related to the adrenal mass the decision was made to get the thing out of there. You won't believe what happened next.

My blood pressure dropped, a lot. Enough so that I said goodbye to the medicine for heat sensitivity and the two-in-one medication. The others are at half dosage. Guess what my numbers are running now? How about 110 or 130 over around 70-80.  And, it appears that the other madness is calming down too.

Now to clarify. as my body adjusts I continue to be extremely tired. My numbers are swinging some and that makes me feel funny. (Especially when it's sugar related.) We're at a conference and even with the help of Hubby and Tomlin, my tail is dragging! But overall I think the decision to remove the adrenal gland was a good call. Who can argue with the results? Everything will hopefully be back to normal soon - or maybe even better than normal?