Here's another one to add to the list. On Tuesday, I had a couple of lumps removed. They are probably cysts. The doctor sent me to day surgery instead of just removing them in the office. The whole thing with pre-anesthesia testing, an EKG and lab work seemed like overkill to me. It looks like a little numbing medicine, a scalpel and 20 minutes in the office and my problems would have been solved. 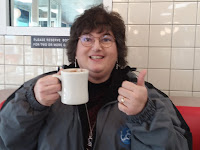 One lump was more difficult than anticipated. Had either lump deigned to show up on the mammogram or ultrasound well, then it would have been easier to gauge the size. Your body may cooperate that way. Mine doesn't. So it should be no surprise that I am pretty sore and fussing about it. We should get the pathology report on Tuesday. My doctor and both I expect that the report to show a couple of benign cysts tried to take up temporary residence. Nothing complicated.

However, the diagnosis is particularly disconcerting given my family history.
My mother went to be with the Lord in October 1995. Mom's breast cancer was officially found in 1990. (I know this because she went in for surgery as my daughter was coming home from the hospital after meningitis.) However, she found the lump and was afraid that it might be a little monster. Instead of having it checked out immediately she ran from it. The insidious beast grew.

Several weeks later she decided to go to the doctor. He checked it, sent her for a mammogram and declared it to be a cyst. No big deal. Run of the mill. Nothing to worry about. Satisfied, she left. It kept growing and she and the doctor went back and forth a few more weeks about removing it. The doctor finally relented and sent her to a surgeon. That doctor told her it was just a cyst, not to worry.

That was before the pathology report came back. Adenocarcinoma. Treatment began soon after. Technically, she survived the breast cancer but not the treatment. I remember her saying that a medicine she took for breast cancer could cause uterine cancer in very rare cases. That would have been her. It metastasized from there and that's the end of the story.

Why do I type this?

It's not to whine, moan or fuss. It's not a play for sympathy or empathy. It's to remind everyone that our time here is short. Life is fleeting. It's also to remind  you to take advantage of what life offers and run with it. Sometimes I close my videos with the reminder to "live bodaciously". We only get one shot at life. It's not a dress rehearsal. Go and live it!


In short, I've lived bodaciously and plan to continue. Some of my escapades are on my YouTube channel, some aren't. Chronicled or not, pathology results or not, I plan to continue to live bodaciously. No matter your life or where you are in it, I encourage you to live bodaciously also. Do whatever it is that you've always wanted to do but haven't yet. Don't wait. Life is too short not to live it as best you can, in all ways that you can.